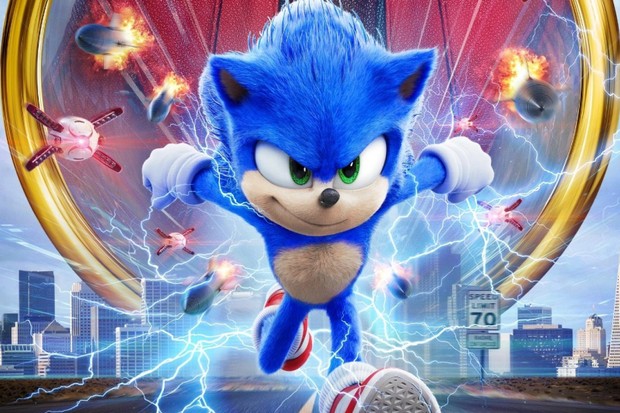 Sonic the Hedgehog had a rough start being delayed because the fans had a huge uproar after the first original trailer was released. The original design of Sonic was all wrong and looked nothing like what fans think when they reminisce about Sonic. The original release date was going to be a November release for 2019. Since the internet took this design and made fun of it to the bone. The rampage was so bad the internet basically cyberbullied Paramount Pictures to redesign, fix and make him look like their beloved Sonic they remember from the games. The movie went from a memed up abomination to a masterpiece video game film. This film has to have one of the greatest story arcs for a video game centered character movie out there.

Some people speculate that the original design was just to see if the audience would cause more people to see their movie if they decided to fix it. Because if you think about it the memes were just a free promotional advertisement. However, the movie being memed into oblivion might have also caused less people to want to see it because the pre-bad press could cause people to think that the movie is a no go and not worth it. By making a brand that cares about their audience’s likes and dislikes of the character they could create a brand so that more people are likely to watch their movies now and in the future. This rumor mill is just speculation and cannot be proven to be fact or false. This is still a great movie no matter what others think.

This movie was the second video game based movie that has come out in the past year. The other being Detective Pikachu in which Ryan Reynolds was the star that debuted May of 2019. These CGI video game based films are on a roll and are doing really well in the box office. The cast for this movie took the cake and no one better could be casted for this movie. The movie stars Ben Schwartz, most known for him being Jean-Ralphio in “Parks and Rec” as Sonic, James Marsden who was Prince Edward in “Enchanted” as Tom Wachowski or as Sonic calls him ‘Donut Lord’, and Jim Carrey most known for his “Ace Ventura” movie series and “Dumb and Dumber.” plays the notoriously favorited villain Dr. Robotnik.

This movie is a Sega sensation for those who don’t know is based off of the ‘Sonic the hedgehog’ game franchise, with a mix of CGI (Computer Generated Imaging) and a live-action film Sonic has reached over $100 million within the first two weeks of it being released. Those two weeks it was the #1 movie in theaters internationally. Coming out of week 3 moving to week 4 the movie is still at the top of the charts and has made over $120 million. The budget for this film was $95 million. Money wise this movie is a huge success still bringing in more money as we speak. Released on February 14th and is rated PG.

While filming the movie Marsden had to stare at nothing and had to just picture Sonic there since he was projected into the movie through the computer. He also didn’t hear what was being said in the way Schwatz would say it, but Schwartz and Marsden did rehearse some scenes together.

Marsden states in an interview about the movie “I would just go into my imagination, listen for Ben’s voice. I would just try to imagine him reading his line in a really funny way, and responding as if you were talking to like a 12 year old kid who’s like wide-eyed and curious about the world, and has this innocence and energy.”

The movie is a great movie for gamers and children. Some references and hints about the Sonic games do come about and the younger kids unless they’re a know it all, might not understand some of the references to the Sonic games that are told even if you don’t understand  it’s still pretty funny. If you don’t know the game or aren’t a kids film fan then this movie might not be for you. Despite what other people think before they watch it this movie is actually really great and entertaining.

I am a child at heart so this movie was really great. It really played well with my inner child, gamer, and film fantasticness. I think the way they brought Sonic to our world was phenomenal. The road trip vibe that was taken could have gone better but, the dynamic that Marsden and Schwartz had throughout the film was really entertaining even though they weren’t physically there together. It was fun to see Sonic and Donut Lord’s friendship blossom.

If I were to rate this movie I would say that this movie is just as good as Detective Pikachu’s movie maybe slightly better but not by much. The way that the characters were developed and written out to be was amazing. This movie did a brilliant job introducing new characters to the Sonic universe and the explanation of how he ended up on our planet earth. After watching this movie I’d give this a 4.8 out of 5 stars.