“As once I fell, so falls the last Skywalker” 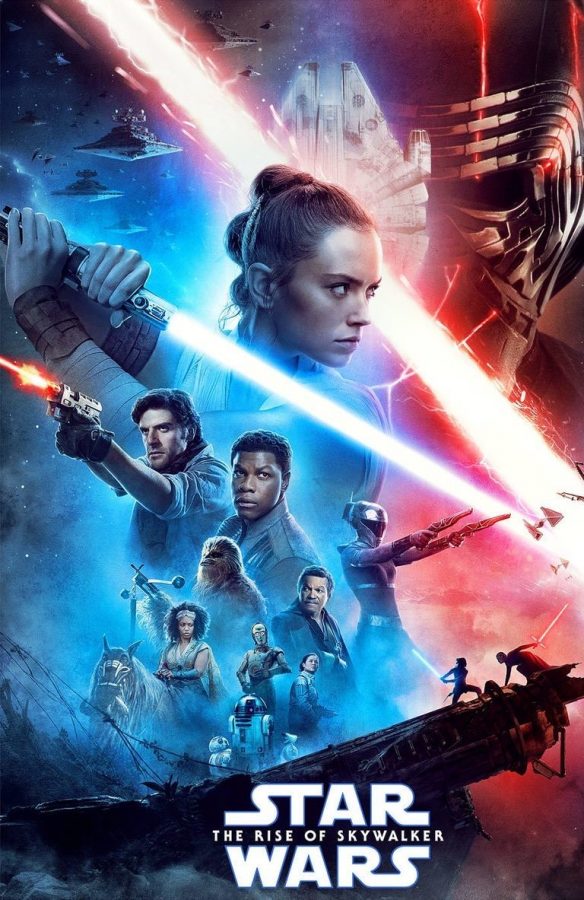 Star Wars: Rise of Skywalker is the ninth and supposedly the last movie in the Star Wars saga. This movie was directed by J.J. Abrams bringing this long war to end on a deep and intense closing.

Mark Hamill and Harrison Ford do make an appearance in this film but are shown very little in the movie.

This Star Wars film opens up like any other with the opening crawl whichtalks about Emperor Palpatine and how he rose up and has became a threat, General Leia Organa continues to train Rey as she is the last hope for Jedi and to win against the First Order and Supreme Leader Kylo Ren and his search for Palpatine so he can destroy him so he can become all powerful.

Palpatine had followers try to bring him back and to get there a holographic pyramid that has the map on it the brings them to Exigul and this map is the only way to find the hidden location. There are only two in existence Kylo Ren has one and Rey is searching for the other.

After awhile into the movie, Leia uses all the strength she has left to call to Kylo and Kylo Ren turns good and becomes Ben Solo again. Ben and Rey come together to defeat Palpatine. It is important to know that during this time Rey has found out her family name is Palpatine and that Ben got hurt and Rey healed Ben making him have some of her life force in him. Palpatine gets defeated the war ends but Rey and Ben are down Ben used the life he has left to save her and he has enough time to pass that he kisses Rey before he poofs into thin air. The movie ends with Rey walking alone and she is asked her name and closes with her saying “I am Rey…Rey Skywalker”.
Rise of Skywalker is great and enjoyable for long time Star Wars fans like me because of the references from the past movies. For example there was this parade that happens every 42 years which was a reference towards the first movie being released 42 years ago. There are so many references in this movie, and Lando comes back and Anakin and many other familiar faces come back as force ghosts.

This movie is rated PG-13 as the past movies have been. Even though most critics seemed to dislike the movie, I for one enjoyed it. If I were to rate Rise of Skywalker I would rate it 4 out of 5 stars. This movie is 100% better than the Last Jedi that was released the previous year.