A victory 40 years in the making 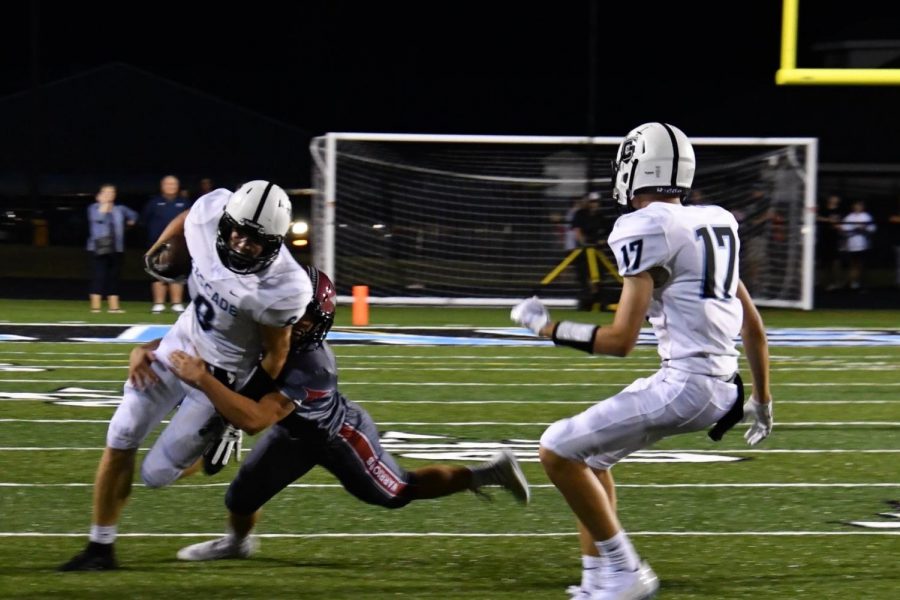 Junior, Zecheriah Carroll with the ball.

Friday, August 17, 2018 is a date to remember.
The mighty Cadets unveiled their new field and beat county rival, Danville, in a game 40 years in the making.
The night started off with a ribbon cutting ceremony dedicating the new field, a visit from the IHSAA commissioner, Bobby Cox and a presentation of a 25th anniversary plaque to Operation Football’s, Dave Calabro.
Casade’s home crowd was pumped and ready to cheer their team onto victory. The theme was white out and the students anxiously awaited the referee’s whistle to begin the game.
It did not take long for Cascade’s team to answer. The first touchdown of the night, and the very first for the new turf, was from a 46-yard throw by Dylan Kottcamp to AJ Sanders.
Danville responded quickly with two of their own touchdowns to end the quarter with a lead of 14-6.
The second quarter, the offensive line, consisting of Cameron Ginter, Brayden Stinnett, Ira Moore and Carter Dugan continued to cover Kottkamp, which allowed a handoff to senior Connor Horning who scored and cut the lead to two at halftime.
The Cadets offensive line held in the third quarter which allowed Horning and Cole Edwards to run the ball for several yards. An incredible interception by Zecheriah Carroll allowed the Cadets to take over on their own seven yard line.
The fourth quarter saw Cascade’s defensive line stop Danville’s drive and a Kottkamp pass to Carroll gave the Cadets a first down. Edwards cut through for a touchdown and after the two point conversion, the score was 20-14.
Danville responded with their own touchdown which gave the Warrior’s a one point lead with 1:04 left in the game. This drove the Cadets to answer the bell and push their way up the field.
The Cadets did not panic and saw the culmination of all their hard work in front of them after managing to find themselves on the 11 yard line after a clever hook and ladder play that enabled them to score the winning touchdown by Sanders.
Coach Spinks summarized the game as “a great example of being mentally tough; they never gave up, they powered through mistakes, they believed in each other, and they expected victory!”