More than an assistant 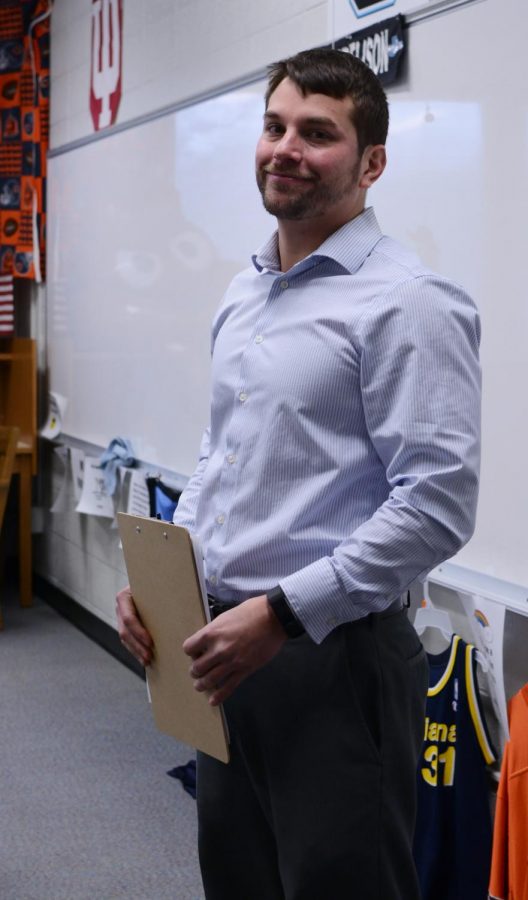 Mr. Hinojosa is always on the go, as seen here.

Teachers often have crazy schedules that require help from assistants, such as Nick Hinojos
While Hinojosa does not hold the official title of a teacher, the lessons he offers are just as crucial. He helps Mr. Burelison better explain complex tasks to students with learning disabilities.
Sometimes he will do very basic errands, like running a job through the printer. Other times he finds himself at the helm, even taking full responsibility over the classroom.
He joined the BSD class shortly after the previous assistant left, being drawn by the opportunity to help struggling students. Since his introduction to the school, he has become close with his students, who often look to him for guidance.
Hinojosa is extraordinarily talented in the world of academics and is especially skilled in the realms of science and English. However, he is also capable of breaking larger problems into small steps for students less familiar with these subjects.
Hinojosa praised Cascade’s work environment and the relationships he shares with his coworkers. He referred to the school as “a special place to be.”
He also shares a deep connection with students outside of the BSD room and is known as Coach Hinojosa on the basketball court. Head Coach Dubois holds Hinojosa in very high regard, having nothing but positive things to say about him.
“Coach Hinojosa has been an awesome addition to the coaching staff. He is young, knowledgeable and energetic.”
He is just as enthusiastic about recording and editing videos as he is about coaching and he often creates videos for the boy’s basketball team. His most common type of videos to produce are “plays,” with his favorites being designed for scouting players.
Contrary to common belief, teachers do have lives outside of school and Hinojosa is no exception. He enjoys a variety of hobbies that include traveling, hiking and reading. He is also extremely close to his family outside of Clayton and enjoys traveling to see them.
Due to his love for his family, Hinojosa found himself homesick during college and had a hard time focusing. He stated that college was both one of his biggest struggles and accomplishments.
“Recovering from the hole I buried myself in to start college and graduating was a pretty big accomplishment. Also, seeing four kids I’ve worked with go on to play division one basketball is a pretty cool accomplishment. Obviously, they did the work and have had plenty of help from other people in their lives, but knowing that I’ve helped along the way in some capacity to help them achieve a goal feels like an accomplishment to me.”
Hinojosa holds the dream to eventually coach college basketball.