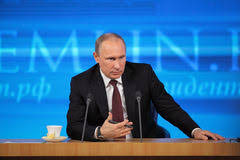 Russia is one button away from releasing the world’s deadliest super weapon that is capable of flattening New York City within minutes.

Just last week the Pentagon confirmed Russia’s ‘doomsday’ device code named “Kanyon” with an impact that could put the fate of the United States at risk.

With Russia and its armed forces on their toes since the end of the Cold War, they have been working on a deadly super weapon that could leave catastrophic damage upon not only the impact zone, but the entire country.

Information of this project was leaked on Russia television in 2015 during a meeting involving Vladimir Putin and Russia’s armed forces senior officers when the camera got a snag of the project blueprints, but just last week this doomsday device was confirmed by the Pentagon.

The design of the doomsday device is a torpedo that can travel at 230 mph in the water and was designed to reach any coastline city. This puts the coast of the United States at risk.

Since the election of Donald Trump in 2016, relations with Russia have been in turmoil with sanctions as a temporary solution. This puts pressure on Putin as tensions rise between the world’s superpowers.

Kanyon is reported to be 5.5 feet in diameter and 80 feet long and carries the power of 100 megatons, 100x more powerful than the US moab (mother of all bombs) and has the same power of 6,000 Hiroshima bombs.

Within minutes of Kanyon reaching its destination the torpedo is capable of killing 8 million people and injuring 6 million more.

Along with a high death toll, Kanyon will also leave behind a trail of radioactive activity that will make the impact zone uninhabitable for years to come.

Steve Martin is an engineering teacher at Cascade High School as well as a former United States Navy Sailor who said, “Russia is trying to keep its people safe while keeping the US in check.”

Martin says he is not worried about Russia aiming the torpedo at the United States, “As long as we keep an eye on them and have good communication to prevent trouble.”

Martin’s views on the Kanyon project is that it is a way for Russia to show its defensive capabilities while trying to head towards ‘peaceful resolutions.’

Whether tensions between the United States and Russia continue to rise or stretch towards peaceful resolutions, Putin has the fate of the country in his pocket.