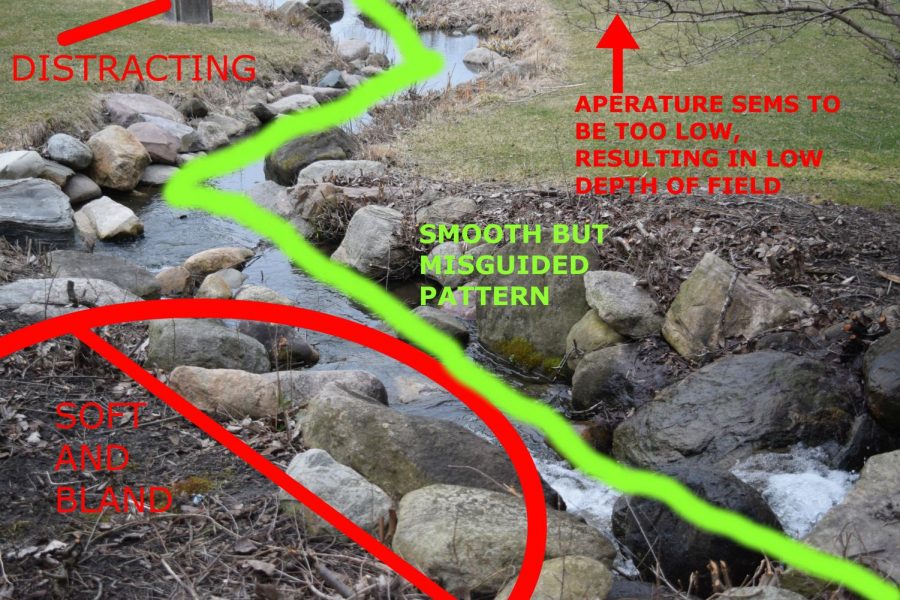 This is just a few of this pictures problems brought to light.

Smartphone cameras are improving, and are now able to produce photographs with quality similar to that of a $1000 DSLR camera. The more recent advancements have caused masses of uninformed people to claim that photography is dying, if not dead already.

However this is far from the truth, which is that a camera is nothing more than a tool. A tool such as a camera is not capable of manipulating itself, cannot tell what its user wants and will most likely never have a mind of its own.

A camera is only as capable as its user and can do no better than they can. Cameras with higher costs have not achieved popularity based on the pictures they take, but by hosting a variety of changeable factors.

The three major settings found in a camera are shutter speed, aperture and ISO.

The shutter speed controls how quickly a camera opens and thus dictates how fast it takes in information, as well as how long the sensor can access the surrounding light sources.

Aperture cannot be so easily sacrificed for faster speeds though, as it decides what is in focus.

ISO determines how much artificial light the camera needs to create, though higher levels result in grainy or “noisy” pictures.

No camera can manipulate all three to guarantee perfect images, which are just a few of the numerous settings found in a camera. Almost all cameras are fully capable of producing beautiful results with proper input, but cameras are unable to find this input by themselves.

One of the most important parts of well-structured photography is a sense of direction and focus, which is known as composition. This is not only crucial to maximizing the appeal of an image, but is necessary to point out the intended message.

If the picture holds distracting elements, such as a surprise subject, it may lose its ability to be taken seriously. However it is not as simple as getting a straight forward picture, as there are various methods to consider when composing a picture. It is a photographer’s job to compose a shot, and they often must do so on the fly.

Another thing to consider is that not everyone who passes by the image will want to take the time out of their day to look at it, let alone appreciate it. In order to demand an audience, a photo must display a fierce defiance for cliches and dullness. This is the spark of creativity, which no machine can accomplish.

The decisive moment is a strong sense of confidence in the picture that is being taken, which requires a blend of talents. It is often quick, but it is far from the blind snapping of the camera. The photographer must see the moment before it happens, and interpret the reactions that each picture will bring out.

Speed and determination, however, are only two of the talents that leads up to the decisive moment. The third and largest talent required is creativity.

The camera was once used as nothing more than a tool to capture the event as best as they could, resulting in very similar shots. This was seen in Oklahoma City when a bomber demolished an apartment complex, prompting firefighters to rush to the scene.

One of these brave men was snapped carrying an infant girl from the wreckage and attempting to save her life, though he seems to be painfully aware that she is dead. It is an impactful sight that depicts both the cruelty and love found inside of the human soul.

Two nearby amateur photographers snapped the same picture of a this, one posting before the other. Due to them using the same angle and composition, only the first could use the shot. The response to these pictures proved photography’s worth, displaying the raw emotion that can be put into a “simple” picture.

Professional grade cameras may not have a secure place in the future, but photography’s existence is as concrete as humanity’s.

It is true that a phone can produce the same quality of a photo, yet it would be a lie to claim photography as dead. A camera does no more work for a photographer than a hammer and chisel do for a sculptor. This art form will not die until the day that a camera can operate without any input, become a mind reader and find the poetic sense possessed by passionate people.